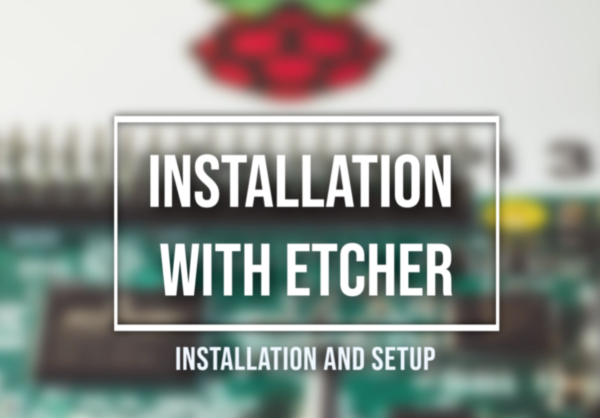 Raspberry Pi setup with the help of Etcher

Important to know is, Etcher only works with the Raspberry Pi operating system or with other operating systems, but not with NOOBS. NOOBS must be installed in a different way. But I will show you that separately further down in the article.

The interface of Etcher is very simple and it consists of only one window. So, after starting Etcher, we select the downloaded Raspberry Pi image in the first step via the "Select Image" button.

After that, you select the location and click like on the button "Flash!". After that the Raspberry Pi image will be written to the SD card.

As soon as the writing process in Etcher is finished, it takes a little moment, then the SD card is ready and can be inserted into the Raspberry Pi. Now the Raspberry Pi can already be connected to power and started. The Raspberry Pi setup of the operating system is basically already finished.

After explaining in the previous section how to use Etcher to write the Raspberry Pi operating systems to an SD card, I would now like to explain how to setup NOOBS on the Raspberry Pi.

As mentioned before, NOOBS is an installer that allows you to install multiple Raspberry Pi operating systems very easily. However, NOOBS is not installed on the SD card with Etcher. To install NOOBS on the SD card, you actually don't need to do much at all.

There is only one ZIP file for NOOBS, which you download from the Raspberry Pi website. You simply unpack it as usual. Then go to the unzipped folder with all the files. You just have to drag and drop the files to the SD card or copy them with Ctrl+C (PC) or CMD+C (Mac). This takes a little while, because there are almost 1.8 gigabytes of data.

You can also change the language to German at the bottom of the screen. After that the keyboard layout will be changed to German automatically. Now we want to install the Raspberry Pi operating system using NOOBS.

Select the first item and click on install. Before you do that, here is a hint: There is still the possibility to set up WLAN networks on this screen.

This has the advantage, if you connect to a WLAN now, that you will be offered more choices of Raspberry Pi operating systems. But for now we only want to install a Raspberry Pi image.

Raspberry Pi setup with the help of a monitor

You should now have a monitor connected and a message on the screen that the Raspberry Pi operating system has been successfully installed. Confirm this with "ok" and the Raspberry Pi will reboot again.

You should now see the boot process. During the first process everything runs through once. After that the startup screen appears. As you can see now, you get the message that the Raspberry Pi has been set up successfully. After that you will be guided through a few more settings of the keyboard etc.

For example, I have set the Raspberry Pi to be located in Germany. Also, German should be set as the language and the time zone is Berlin. Next, I get a message that the default user is 'pi'. The default password is 'raspberry'. You can change this now if you want.

In this section I want to explain how you can setup the Raspberry Pi without having to install a monitor. Sometimes you don't necessarily have a keyboard, mouse and monitor available for the Raspberry Pi setup.

For this case there is the possibility to set up the Raspberry Pi installation completely remotely. The advantage of this is that you learn at the same time how to work with terminal commands on the Raspberry Pi.

Please note that you can only set up the Raspberry Pi without a monitor if you don't use NOOBS. NOOBS is a graphical user interface to install the Raspberry Pi image, which I explained above.

After downloading the Raspberry Pi OS, you will again use Etcher to write the OS to the SD card normally as described above. After writing with Etcher you will find a lot of files on your SD card.

In order to access the Raspberry Pi remotely over your home network later without using a monitor, SSH needs to be enabled. SSH is an access or a way to access devices and execute commands there. To enable SSH access, you need to create a file on the /boot partition of your SD card that simply has the filename (without any extension) "ssh".

That's all you need to do. The best way to do this is to plug in your SD card on the Mac, then navigate to /boot via the Finder and duplicate any file there with CMD + D. Then just name this file "ssh". Then rename this file to "ssh".

For Windows you do the same and plug your SD card into the computer. Then go to the Windows Explorer on /boot and create a new empty file with right click + New - Text file and give it the name "ssh". You delete the file extension .txt when renaming the file.

If you have problems with this, you can also use a simple text editor. The only important thing is that this "ssh" file must not have an extension in /boot. Sometimes the files get the txt extension automatically. Then the access on the Raspberry Pi later via SSH does not work.

With this the SSH access on the Raspberry Pi is activated. The only thing that has to be considered now is, to use the Rasperry Pi, you have to connect the Raspberry once to your router via LAN cable. Once you have done that, you can continue.

Find out the IP address

Once you have connected the Raspberry Pi to the LAN port of your router and connected it to power, you still need to find out the IP address of the Raspberry Pi on the network. If you know how to do this with your router, for example via the web interface, then you can do this in this way.

If you don't know the IP address, you can also use a freeware. For the Mac this is the software LanScan. You can find it in the Mac App Store via search. If you have a Windows PC, you can use the freeware Advanced IP Scanner. (www.advanced-ip-scanner.com/de)

I will explain this with LanScan. The Windows program Advanced IP Scanner works the same way. You just click on "Start LanScan", then it lists all devices in your network that are connected to the router.

On the Mac there is also another possibility to find out the Raspberry Pi IP address after the Raspberry Pi setup. You simply open the "Terminal" program and enter the command "arp -a" followed by Enter. After that you will get a list of IP addresses that can also identify your Raspberry Pi.

Next, use the command 'ssh pi@ip-address' in Terminal or Putty. The default username is 'pi'. Then press "Enter" So, now you just have to enter the password 'raspberry' followed by Enter. And you are already logged in to the Raspberry. Bravo!

Now you can make the first settings. Type the command 'sudo raspi-config', because you have to execute the command as super-user (sudo) with all permissions. Now you can have a look around in the following screen. You don't have to change the password now.

The first thing to change is 'Configuring Locales'. These local settings are so important, because the setting 'Wi-fi Country' is also set. There you have to select Germany as country, otherwise the WLAN cannot be activated later.

After confirming with "Enter" you get the success message and confirm it with Enter. Now you can go through all the other settings again if you want to look around a bit.

In the "raspi-config" window you can select the "Boot Options". There you can set if the Raspberry Pi will boot with the graphical user interface or with the command line? But it is best not to do that at the moment.

Where you should set something now is the "Interfacing Options". There you will find the item VNC. VNC is a server that allows you to access the graphical user interface of the Raspberry Pi without a monitor.

VNC should be set to enable under "Interfacing Options". There are more settings, but we will not go through them now. Now go back to the beginning with ESC and select 'finish'. Now you have all basic settings for Raspberry Pi access without monitor.

To access the graphical user interface of the Raspberry Pi you can download the program RealVNC. The program is free and can be downloaded for Mac and PC at realvnc.com/en/connect/download/viewer/.

In RealVNC you now enter the IP address of the Raspberry Pi. Then a login window opens. You have to confirm this once with "Allow".

From now on, the Raspberry Pi setup works just as if you had a monitor connected. Now, there is still a notice during the Raspberry Pi startup process that it is a security risk if the username and password are not changed. But that's fine for now, since you usually only run the Raspberry Pi on your network.

From now on, you'll go through the steps in the Raspberry Pi user interface, where you can choose whether to download updates and so on. The procedure is now again the same as the Raspberry Pi setup with a monitor from the section above.

* = Affiliate Link (raspi-config.com) is participant of the affiliate program of Amazon USA, which is designed to provide a commission for websites to earn advertising fees by placing ads and links to Amazon.com).