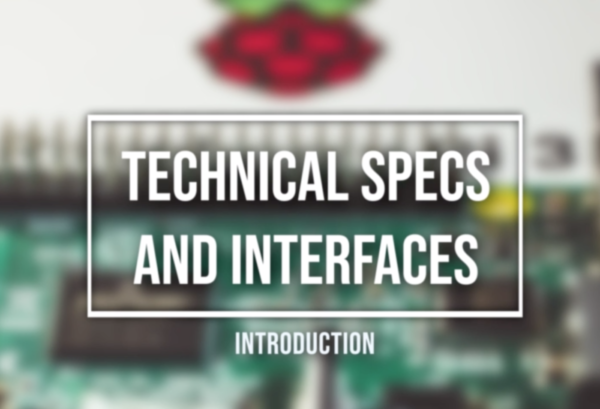 In this article I explain the components and technical data of the Raspberry Pi 3.

On the board there are two so called serial interfaces. The first one is for a LCD display and the second one is for the official Raspberry Pi camera.
System-on-a-Chip (SoC)

Apart from that, there is a chip from Broadcom on the board, a so-called System-on-a-Chip. A system-on-a-chip is a chip with all the necessary modules for a computer, such as the main processor, RAM, sound and graphics processor. All these modules are combined on this one chip.

The working memory (RAM), which also sits on the SoC, is 1 gigabyte and the graphics processor works with 400 megahertz per second. Furthermore, an HDMI output is installed, which can render a resolution of 1080p in FullHD.

Furthermore, the Raspberry Pi 3B+ has a 3.5 millimeter audio port, which is also a composite video port. If you can't use the HDMI output, this is an alternative way to output the video signal via this video output.

At the front of the Raspberry Pi 3B+ is the Micro-USB connector for AC power and 5 volts. As mentioned above, it is recommended to use the official Raspberry Pi power supply.

The sensors and modules can be connected to the 40 PIN input and output connectors to work with them on the hardware side. On the chip with the raspberry is still the WiFi chip with the standard 802.11ac. Bluetooth version 4.2 is also integrated on the same chip.

Other than that, there is also a micro-SD card slot installed under the motherboard, which serves as hard drive storage. By the way, the Raspberry Pi 3B+ has a power consumption of about 3-5 watts under full load. That's roughly 7-8 Euros of electricity costs per year if it would run every day. So the operating costs are very low. So much for the technical data of the Raspberry Pi 3B+.

Do you want to buy a Raspberry Pi? Then I have put together a list of all the components you need to get started with the Raspberry Pi.